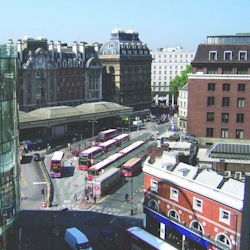 2009-2018. Victoria Underground Station Upgrade, London, UK
Victoria underground station is at the heart of London’s transport network and is one of the busiest and most congested stations, used by around 100 million passengers each year. Over the years numerous improvements are carried out in the Victoria Station Upgrade (VSU).

Close proximity to an urban environment meant the interaction between the jet grouting with existing basements, foundations, utilities and tube tunnels needed a robust monitoring system. The surrounding buildings were closely monitored using Robotic Total Stations (RTS), prisms and back-up manual monitoring. Below ground saw the installation of precise liquid-levelling cells in a number of building basements, accurately monitoring vertical movement in near real-time during the critical stages of the project. The Profound Liquid Levelling Sensors (LLS) were linked with an IS-module including internet connection to send data into the web based online monitoring software including alarm through SMS and email, and automatic PDF reports.

Read more about the project here as published in the Institution of Civil Engineers (ICE) magazine.